I hope that you had a wonderful Independence Day celebration this year. It was certainly a scorcher here in Boston.

We took the kids to the Lincoln, MA fireworks display Sunday evening. It was well past their bed times, so we had them in their pajamas before we left the house. There was an incredible turn out and our kids were well-behaved. Our youngest fell asleep for a bit before the fireworks actually started. I’ve never tried to take photographs of fireworks before, so I figured since I won’t get the chance to do so very often, this was the night to try.

I set up my kit beforehand on my trusty tripod. I didn’t extend the legs because of the crowd around me. I used a remote shutter release, turned off image stabilization on my glass, went ISO 100 and aperture was ƒ10. I figured something between 8 and 16 would get the job done. I manually focused to infinity and then brought it back a bit. It’s hard to manually focus in the dark, that’s for sure. I used Bulb mode in manual, and basically just as I saw that a shell was about to explode, I depress the trigger and then when that explosion was nearly complete, I’d let go of the shutter and that would be the photograph.

I was using my kit lens (arghh), but it’s currently my widest lens… so 18mm x 1.6 cropped sensor = 28.8mm. I was initially going to go with a 50mm prime, but I’m glad that I didn’t. The fireworks didn’t go that high, so at 28.88mm I was still not getting all of the spark showers for some of the displays. 50mm (80mm) would definitely have been worse.

I only took shots for about half of the show… I wanted to enjoy them with my wife and kids while relaxing and really watching them. The shots that I did take turned out rather well. Since I was with my wife and kids, I didn’t worry about trying to take shots that necessitated moving the tripod around, etc. They was a lot of opportunity for that, but basically my glass was pointed up into the sky and that was it.

Anyway, here is an example shot I got from the collection that I took. 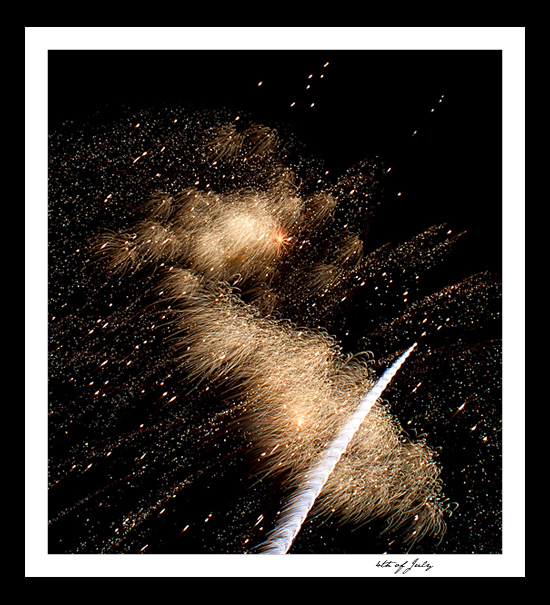