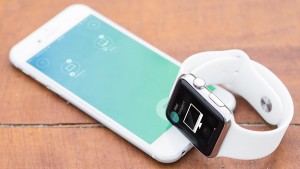 The idea of having a BLE-enabled proximity lock & unlock for a work computer is a really good one. I generally have quite confidential information displaying on my monitors at any given time throughout the day. If I run to a meeting, the cafeteria, or down the hall to refill a water tumbler, my screens lay exposed for wandering eyes both internal employee and the rare external visiting guest.

Enter Near Lock for iOS. I’ve been putting it off for a while, noting that generally BLE distance measurement isn’t all that accurate. But I gave the free trial a go (which won’t work in the background) and it worked just fine. I paid the $3.99 to unlock the backgrounding.

Now when I walk away from my desk, my Mac is put into screensaver mode (which I have a password set to upon wake). When I walk back with my phone on me, after a short delay, the password is entered quickly for me into the password field and the Mac is unlocked and ready to go.

To be honest, it’s not rocket science. The iOS device or Mac polls for distance of the BLE signal and fires a script – probably AppleScript – do perform the hands-free task.

I created an Automator script that fires an AppleScript that backs up a local wiki on my Mac, and then emails myself telling me the backup too place. It needs to circumvent the screensaver when doing so – which is exactly what Near Lock is doing. They have it triggered on BLE. Which is slick. And has always worked.

My script should still work normally (set as a cron job at the moment) – and Near Lock should work on top of it.

It’s a small but handy thing. You can require TouchID or an Apple Watch to allow the wake up if you want. Which is a nice touch.