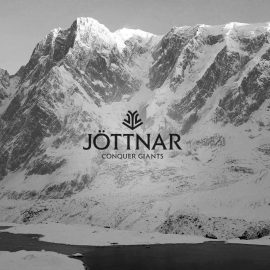 Jöttnar was born in Arctic Norway and is the creation of two former Royal Marine commandos and lifelong mountaineers, climbers and skiers.

As commandos, Tommy and Steve specialised in mountain and extreme cold weather warfare, often training in the high Arctic circle.  They were together in the Norwegian mountains during a fierce Arctic winter when inspiration took hold: the development of technical outdoor clothing that would protect against the raging brutality around them, whilst capturing the purity and elegance of the Scandinavian landscape.  So they founded Jöttnar.

Since launching in 2013, clothing by Jöttnar has withstood the demands of the most exacting users in the most ferocious conditions.

There are excellent articles posted to Jöttnar all the time, and the latest is entitled Spire of the Gods. Awe inspiring.

Why am I drawn to these majestic mountain vistas and the romantic notion of lack of toilet facilities and brutal punishment while climbing oxygen-deprived trails? Why would I ever consider visiting such places when I know my body is in the exact opposite condition to be able to hack it? Even with training, this isn’t my element. There are those who live for these conditions. These tests.

This self-imposed suffering to stand nearly alone in a gorgeous vault of stone and snow. To exist on meager rations, purified water, and pounding solar radiation. Clouds of yak dung wavering in the sliding air. Shivering in a plywood box of tea house room, waiting for the sun to come up to try and get warm again with step after step. Looking for a latrine behind some stones in the hope of a little private relief on the side of a mountain.

I have no idea. It’s silly. It isn’t prudent. Yet, here I am. Wanting to tread in such places. Knowing I don’t stand much chance. Knowing that in some way I would be an outsider, hoping for some small fraction of acceptance from those who do these things on a regular basis. To scratch my name on the wall of a building so that in hundreds of years, someone might see it and know this anonymous person suffered the same.

Ugh. It’s perplexing. Do I just love the idea of it, or would such an experience help to open my soul up a little more and let it move through me? Is it a notch to wear nobly to any who might care about such things? Would anyone? Would it matter?