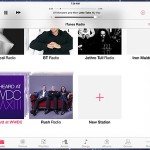 Lucky enough to attend WWDC13 this year, when iRadio was announced and released to developers, one of the cooler parts of the at conference iRadio offering was a station called “Music Heard at WWDC”.

Apple culled together a lot of music into a playlist that would play during intermissions between developer sessions. All that music was put together into a iRadio station. I think since the conference ended it was removed from a station to access. However I saved it to my stations right away – and I have access to it still.

Every morning in the shower is an Apple commercial – complete with soundtrack. Using a wireless Bose BT speaker and my iPad mini, I am filling the upstairs with sweet Apple camp. A pretty nice way to help set the day right.