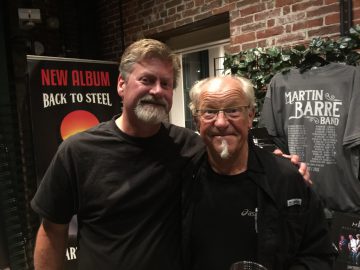 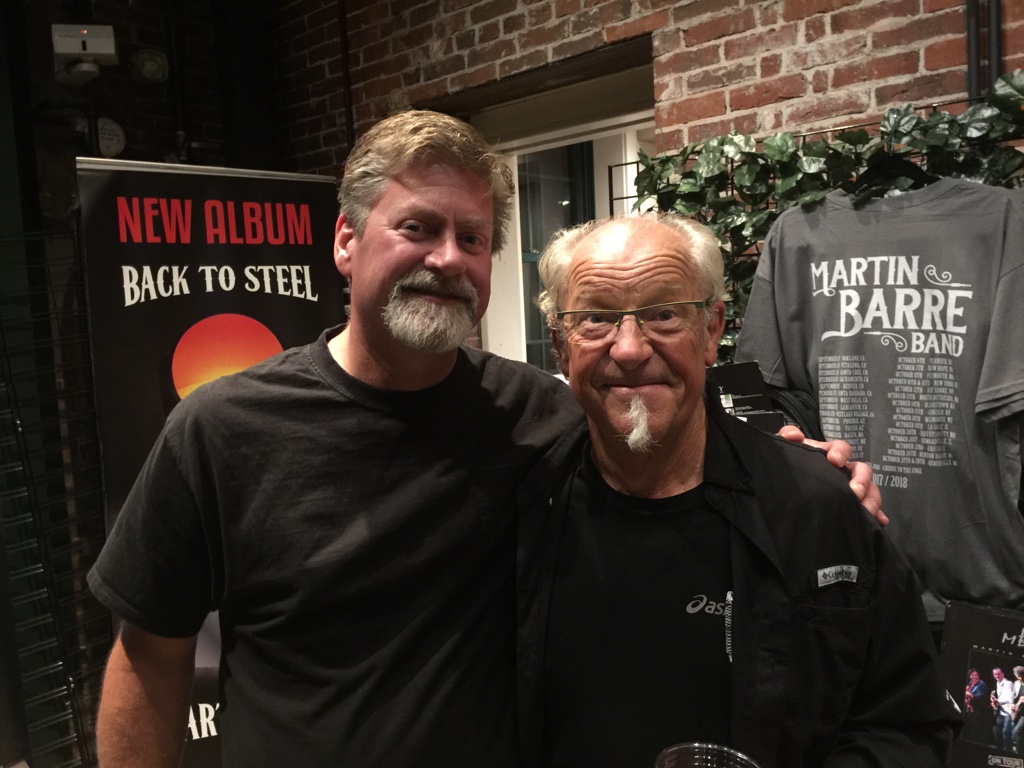 Last night I was able to check off a bucket list item… meeting and chatting with one Martin Lancelot Barre. And in quaint Natick, Massachusettes of all places (TCAN).

I’ve never been to TCAN, but the location was lovely. Very clean, the staff was extraordinarily friendly. Parking was simple. The evening temperatures dropped to a pleasant fall chill with a nice breeze. I had some time to kill before the concert (The Martin Barre Band) so I took a leisurely stroll and procured some coffee. When I got to the venue about 20 minutes before its scheduled start, I found myself in a small sea of pleasant fans. Purchased a few Merlots, and found the merchandise stand. Martin’s lovely wife Julie was there working – and she honestly could not have been nicer to everyone. She’s married to progressive rock royalty and she was kind, polite, and in a wonderful mood. She put me in a wonderful mood as well.

I was able to meet several members of the Jethro Tull group – and they were all wonderful people. I won’t mention them by name, but they have attended enough of Martin’s shows to have become friendly. More about that later.

Martin was magnificent. His playing got tighter and tighter as the evening went along. He was paired with very capable players, but it was easy to hear how much talent the man, at 70 years of age, was able to pour out of his guitar/mandolin. The first set was wonderful, some Tull mixed with his own writing. It seemed a little robotic – but good. The second set is where I thought Martin shined. He was more into it, even taking an empty seat in the front row next to fans without missing a beat. Several times throughout the sets Martin called out a few guys in the front row – the ones I met in the JT group I am also in. They really knew Martin as well as other band members.

After the show, hanging with the guys, I was able to meet the band and Martin. The JT guys, I found out, bought the band chicken wings before the show. Martin yelled them out by name, and the moment was fluid and friendly. I was surprised at how friendly everyone was. Julie, Martin, and the others. No ego, rather a camaraderie. Sincerity. Martin went on about how he didn’t get a lot of sleep last night, the traveling from the West coast to the East coast was taxing, talking about how the drummer was on point the night previous but had three flubs tonight. I felt like I could hang out with these guys all evening if I wanted to. I felt a little like an outsider since most of the people around me already had an established relationship with the band. Including the four band members and Martin’s wife, there were probably only seven of us. So it was intimate. No hustle or bustle. No groupie interactions.

A Barre/Anderson reunion? Never going to happen. Martin admired a tattoo of his caricature on someone’s arm and loved it, then saw one on the same arm of Ian. He told the guy he should get that one blocked out. I don’t know exactly what happened between Ian and Martin, but it seems severe. I heard recently say that he thinks they might play together again – but I think Ian is merely trying to save face. To whitewash what an asshole he’s been to bandmates over the years. Ian is a genius, no question. I just don’t think he is much of a people person.

A wonderful, wonderful night. Uncle Stas, I wish you could have been there with me. Maybe, in some way, you were.

Setlist (I have the board recording for this whole thing):