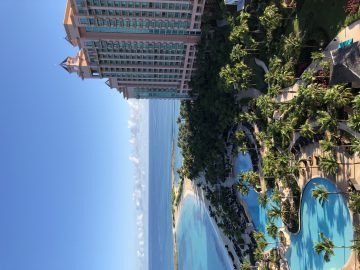 Before we departed for our Atlantis vacation, I spent far too much time watching YouTube reviews and reading packing lists. I wanted to know what to expect. The most prevalent thing I noticed people talked about was the price of food. That, the fact that 15% tip is worked into everything already, and that there is also a 12% VAT on everything.

People discussed packing a separate piece of luggage that contained nothing but foodstuff and snacks. I think if you go into the experience knowing that you’re going to be spending 200 – 300% more for meals than you’re probably used to, you’ll be alright. Know what? Everyone is right about the pricing. A bottle of water will cost you anywhere from $5 – $12, depending on the size. You can make do with simple tap water and your own bottle systems, but the tap water is quite soft and it could upset your belly a bit.

Food and basically anything else is expensive. The quality, for the most part, is good. We had several buffet breakfasts which were passable, a few buffet dinners which seemed better, we tried the pizza place by the marina (very expensive and we couldn’t find a table outside so we had to eat in a lobby which I disliked). We tried Olives and felt that the food was overpriced for what we paid for it. Lovely view though.

After the first day, we just went into eating with the attitude that it was going to spend a lot of money. We did try Starbucks (which I loathe) to get coffee and some bread-based food – long lines but only slightly less expensive than the buffet. Yes. Food is going to cost you a lot of money.

Also – if you want to try any restaurants, try to book in advance (before leaving for Atlantis). We tried this and most things were already booked already. So we went to the concierge right away and were booked into a few places. We had a $300+ Chinese meal we wish we hadn’t gone to though. Don’t go to the Bahamas and have something you can get for $60 back at home. Try to eat some local cuisine if you can.

Tried conch with pepper. I’ll let you judge the dish.

Everyone we met was extremely nice. Given that Nassau lives on the tourist trade (resorts and cruise ships), they need to be. But to be honest, I felt it was all quite genuine. From our taxi drivers to waitresses and waiters, to the resort staff members, to people downtown Nassau and the Straw Market. Honestly everyone.

That said, visitors were sometimes pushy. If you are queued in a line, they don’t care. They will cut in front of you. Buffet line, at a store, at a water slider, at a concession area, etc. It will happen. I don’t know if it’s because these people come from all over the world or since they spent a lot of money, they feel like they should be able to do whatever they’d like.

The Rapid River danger is real

The Rapid River can be quite dangerous. I went on with my son and daughter without incident a few times. The last time, our raft was slightly deflated. I was in the back, which meant a little more weight was on the back with me, pitched backward a little more than normal. My daughter was in front. We just entered the slippery rock section under a footbridge – the guy directing traffic into the chute warned me to watch my head. I leaned forward a little to avoid a skull collision and the raft shot out from under us – just as we entered the rapids. It was all I could do to try hanging onto the raft – but I couldn’t. My daughter and I were tossed through the boulders, trying to keep our heads above water.

We emerged at the end – and a worker had jumped into the water trying to help us. That was great. My daughter was on the side of the wall crying hysterically. She got a few little scraps on her leg – I think she was more frightened about the entire experience.

Then I looked at my leg, and it was pretty awful. I hadn’t noticed at all until my daughter was patched up and not crying anymore.

I had many deep cuts and scrapes on my right knee. Some cuts on my right ankle. I was wearing water shoes that ended up fairly ripped up. Thank goodness I was wearing them, or my feet would have been in pain for the rest of our vacation. Atlantis is huge, so there is usually a lot of walking to be done.

I received band-aids and some minor medical attention. It’s been a week since we’ve returned and my knee and ankle are still sore from the thing. The ride was awesome–until it wasn’t. Be careful. It’s a lot of fun, but you have to watch yourself and your positioning in the quicker sections of the ride.

The water was slightly colder than the pools (we went mid-February). To me, this was perfect. I like spending a lot of time in the ocean compared to the time spent in a pool. There are plenty of rock formations in the ocean near the beach. I was wearing water shoes, so I was fine and had an easier time of it than my family who went barefoot. The sand is wonderful and there are fish that come quite close to the shore.

The elevators are very, very fast – so get a room/suite up as high as you dare. We had a view of the pools and beach on the 14th floor (there was no 13th floor). Obviously, the higher you go, the better your view. We couldn’t see the sunset from our room – that could be seen on the other side of the resort. I suppose it all depends on what you’re after.∑