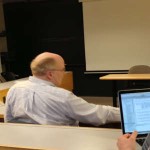 Tonight I took a drive down I-90W and into Boston down to MIT building E51 for a Cocoaheads Boston meeting. I was sweating the intricacies of getting around down there since I’m not exactly familiar with the area, but once I got near it was easy enough to find and park in the Heyward lot. Finding the room was easy enough as well.

The room started off with perhaps 25-30 people but it quickly swelled to more than that – the room was at capacity. Which was great! I’ve been to Flash get-togethers in the past during Flash’s heyday (outside of events at Adobe itself) that had far fewer participants. Anyway, the age range was generally college level and up to around perhaps late 50’s – everyone well-seasoned.

I swear I saw a guy present who reminded me of a young Steve Jobs – same forceful and precise speech, same haircut when Steve was younger, and the same nose, same hair color, etc. He kind of commanded the room which was awesome. Also saw a guy who co-leads the group who looks just like Joshua Davis (Daniel Jalkut) – without all the ink. Very well-spoken and he speaks at conferences. There was a guy who wrote some Core Data 1st and 2nd edition – 2nd edition geared more towards iOS, the first geared more towards OS X.

Things started off with pleasantries and talk started with source control. There were many bright minds in the room and people who have been using source control in very large teams and to a larger degree than I personally ever have. Modules and sub-modules and using CocoaPods. I never heard of CocoaPods before but as it was explained it sounded very cool. I might check it out and see if it makes sense for me or not.

A hosted technology was spoken about at length – but I didn’t catch the company name. They provide source control where mercurial OR Git can be used for the SAME project. If you have a project and developers can’t decide which single source control system to use, they can use whatever they’d like. There is a bunch of special sauce to sync everything across backend repositories – and they claim 100% guarantee that the data will be safe using their technology. I guess they have modified Git, etc. a bit to make their special sauce to work – and invisible to the users special data is saved with commits to allow for stuff to be parsed back between source control systems. Sounds pretty remarkable – but not something I could use. I kind of like Git, but I am foremost a Subversion guy. With so many 3rd-party code coming from Git it makes me wonder a little though about something like this.

Update: Fog Creek Software has a blog post about Kiln Harmony. Read it for yourself. Original announcement.

Every single repository in Kiln Harmony can be used from both Git and Mercurial. Simultaneously.

The Steve Jobs look-alike talked and showed some attributed string and autoLayout stuff. It was nice to see some iOS 6 stuff being bantered about. He had found a few hiccups with attributed strings (notably getting text to center vertically in a UILabel by having to set it’s background color – even [UIColor clearColor]). Everyone groaned about autoLayout – but he said keep banging on it because it’s quite powerful. It’s something new to learn and the string constraints looks weird. People complaining that the springs and struts is so much quicker – which is true. But not nearly as powerful. Still, it’s taking people a lot longer to use autoLayout right now.

Some guy named Eric showcased a lot of Xcode tips in regards to opening and closing left and right side panels, someone else talked about pinning an editor to Callers, etc. Overall some nice things to see.

Some tools/things that were mentioned:

So after two hours I was in the mood to get back on the highway and not join the thirty who went for dinner and drinks. But I had a decent time, and feeling out the group I found them very friendly, very knowledgable, and well-seasoned. A very worthwhile time for sure. I’ll be attending the next meeting for sure. Next time I’ll bring the MBPr.