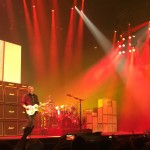 #R40BOS. I was totally relaxed coming to TD Garden with my wife. Traffic wasn’t wonderful coming from the suburbs into the tightened roadways of Boston. The merging of several lanes of traffic mixed with an accident along the way slowed us down considerably. We had already purchased North Station parking, so we didn’t mind. That, and we gave ourselves plenty of time to get to the venue.

We planned on going to The Four Boston to grab something to eat for dinner before going to the concert, but the slow down on the way prevented that. Coming up from the parking garage into the ground floor of TD Garden, we were met by the usual pre-concert crowd milling about. We soon discovered that the line for entry had already formed, so we went outside to get in line. That was one enormous line – hugging the fence and then wrapping out onto the sidewalks as far as we could see. Three or four people wide. This show was going to be packed.

Something else was quite apparent and easily discernible. There were women in line. A lot of women, mostly older with their presumed husbands. And then the kids. Lots of young kids with noise-suppressing head gear. For all the many times I’ve attended Rush’s shows, this was a first for me to see. It was wonderful.

We finally walk into the venue.

We made our way in, and filed to the first concert retailer selling R40 memories of various types. We switched vendors as we discovered one nearby with nearly no lines. That probably saved us twenty minutes. We had about 30 minutes before the scheduled 7:30PM start. We grabbed a shirt, hat, and program – then made our way to the floor. Third row, seats 13 and 14. Right on the end, which we greatly appreciated. If we needed any extra room to move, we could take a step to the left. Need to get some more drinks or use the lavatory – quick and easy.

We people watched, fascinated by some characters in the rows in front of us. We watched the crew climb up into the lights, saw the guys in the red R40 suits getting ready, watched 3 photographers march into position in front of the barrier, and saw many VIPs go backstage. We later figured out a few people were tossed from the first and second rows – but we have no idea why… I believe the validity of their tickets was in question. I digress. 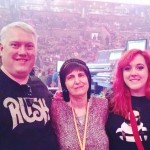 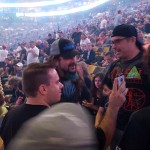 We were in a perfect spot. We noticed a lot of commotion to our right – Mike Portnoy (previously of Dream Theater) was there with his blue beard. Donna Halper was in the back by the sound board – too far away to see (I’ve seen photos from the concert of her).

We enjoyed our drinks, watched Lerxst’s guitar tech tune his double-neck, talked a bit to some of the fans, and I was quite relaxed. My wife was a little nervous as she only knows a few tracks (80’s material) and knew she was going to be left in the cold for most of the evening.

Then the video ended and the first shockwaves from Neil’s kit hit me squarely in the chest. Uncomfortable at first because of the unique and intrusive nature of the force. The power. The mechanical influence.

I was quickly covered in goose bumps. My face stretched from the smiling. My right leg stomping to match the beat. And the evening flowed like the sweetest intoxicating wine. Close enough to Alex to watch his unique personality shine as he hammed for the front row.

I have a nice video of part of Xanadu, but WP won’t allow me to upload it yet.

The sound at TD Garden did not suck. Which is unique to the place, as it’s notorious for it’s shitty sound. This night things sounded wonderful. Especially Alex. Where we stood, it was difficult to pick out a lot of detail from Geddy’s basses – but the fact one could hear much at all was a delightful surprise.

Geddy wouldn’t come over to our side for a while, but when he did we could see the wrinkles of time lining his smiling face. His voice was something to worry about because of previous tours and the all the singing he’s done – trying to hit some seemingly impossible notes at his age. Tonight – he hit them all with seeming ease. I’ve experienced hearing him strain in the past. And it’s painful to see a hero try and fail at times to do something he could easily pull off when younger. People on forums and fan sites bash him. Forget about that this tour.

There was a time when Neil tossed a stick which bounced off a cymbal and in front of his kit – failing to catch it in time. Alex picked it up and began to play his guitar with it for a while. It still sounded great. And the boys were having fun.

Neil is known to be quite serious while playing – and tonight was no different. But there were times where he cracked and smiled and played around making silly faces. Perhaps those moments were scripted. We may never know. But they only added to the vision of joy on stage being projected onto all of us. I got the feeling that they were thinking to themselves, “I wish we could play this bit of Jacob’s Ladder forever, it’s awesome.”

We were taken on a musical journey. Nearly three hours of sweet, glorious, nearly precise music. I could have not asked for a better evening. I haven’t gone into any specifics about the setlist (B) or songs. I’ll leave that for those who attend.

Boston kicks us in the genitals.

We left during the closing video. Many stayed to watch, but we wanted to beat the traffic. Since GPS doesn’t work under the garden, we relied on it being spot on as we exited the building. Not a good idea. We got turned around a time or two, but did ultimately get on track and got onto the Mass Pike heading east. Where we promptly were stopped in traffic waiting for something.

Turns out three lanes merged down to two, and then one, and then a few hundred feet more back to two, then one… which turned a trip that should have taken twenty-five minutes into an hour and forty-five minutes. Thank you Boston city planning. Tired and experiencing joy from the concert only to have our hopes of timely slumber dashed. By the time we slowly managed to roll to the Cambridge exit, things sped up. It was one of those moments where you wonder why in the world things were so slow to begin with – after all the merging. I’ll end this rant here since it’s not integral to the review.