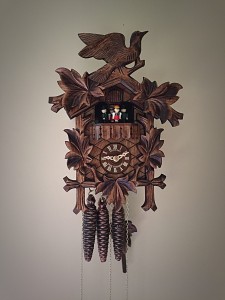 There is no timepiece outside of a majestic grandfather clock that can match the charm of an authentic cuckoo clock.

My mother recently traveled to Nuremberg, Germany to attend their Christmas festival. While there she bought us a cuckoo clock and had it shipped back home and then to us for Christmas. I’ve shared a photograph of the cuckoo in situ.

It’s something I’ve always wanted in the home and something to pass down to the kids as something fun. It hasn’t been without it’s challenges. It’s a 1-day winding movement with rotating people and a cuckoo. It plays a tune after each cuckoo event. I hung it in the kitchen but the ticking and the cuckoo proved to be too distracting for some, so I moved it into the dining room.

However, after moving to the dining room the minutes hand started to stick as it neared the 12 o’clock position. I tried all kinds of things to remedy the situation. As it turns out, there is a switch on the left side that operates always cuckoo, cuckoo w/o evening, and no cuckoo. The switch was nudged into a position between two and thus provided friction internally – stopping the minutes hand from free movement as it neared the 12 o’clock position. Now she’s running fine again.