Casio Pathfinder: A key to atomic clock syncing on the east coast. 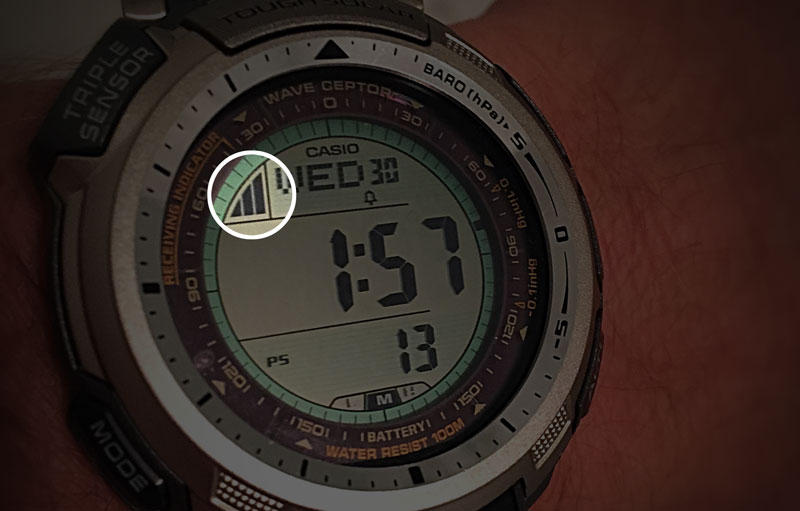 When I first received my PAW1300T-7V, it had a medium charge. After a few days I managed to get it powered to high, but it must have been early on into high. I would get an atomic sync perhaps twice a week. This was while placing the watch on a window sill facing southwest as I live in Boston. Syncing was hit or miss.

I purchased a LED solar watch charger and after about 10 hours on that, the watch is on high, but I know it’s got to be on the high end of that charge state. Since that time, the watch has synced every single night while I wear it on my wrist. On the wrong side of the house far away from any of the windows.

So I believe that the atomic watch signal reception in the watch depends highly on the battery status of the watch. With my Pathfinder at a high charge all of the time now I am getting syncs without fail every night on the east coast (which I have read can be dicey because of the distance from Colorado). Given the watch is quartz, the accuracy is rather high and nightly syncing isn’t that much of a concern, generally speaking. You can easily get away without syncs for weeks at a time and you’re still going to be close to the accurate time.

Having a watch that you know is completely accurate without fail – down to the second – is a nice feeling. After a sync, go to http://www.time.gov and see your watch exactly synced with the atomic clock. It’s pretty awesome.

Your Apple Watch would have the same kind of accuracy, but I’d hesitate to take my Apple Watch on a mountain hike. You’d get more accurate altimeter readings (GPS of the watch versus Barometer of the Casio) but at a cost of battery life and cell strength.

So, keep that battery charged!