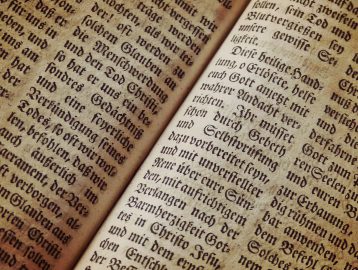 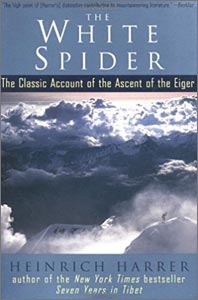 The White Spider: The Classic Account of the Ascent of the Eiger

At 13,025 feet, the Swiss Eiger doesn’t approach the height of Everest or Denali, but the sheer rise and difficulty of its 5900-foot north face keep it in the company of the world’s most celebrated peaks. At the time Harrer (Seven Years in Tibet, originally the sequel to this volume) became part of the first successful summit climb in 1938, the north face of the Eiger was considered the “last and greatest of Alpine problems” left in the world. Originally published in 1959 (with chapters added in 1964 and an index covering subsequent Eiger climbs), this riveting account of his ascent and the history of confronting the Eiger. A beginning with the first fatal attempts to conquer the north face in 1935 is a crisply written paean to the mountain where Harrer first earned recognition as a world-class climber. A simple narrative style brings to life the many obstacles faced by Eiger climbersAsnowstorms, avalanches and a continuous shower of falling rocks among them. Harrer has a Hemingwayesque appreciation of the codes, bravery, and rules of conduct governing the closed world of “true mountaineers.” And he reserves special contempt for the sensation-seekers who gather to watch deadly feats of climbing from the ground below. Sections that document the evolution of climbing gear (Harrer wore no crampons on his 1938 ascent) and national rivalries in the WWII-era climbing community help make this volume an important contribution to the emerging canon of mountaineering literature. 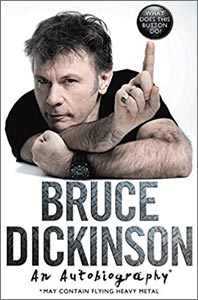 What Does This Button Do?: An Autobiography (Bruce Dickinson)

A long-awaited memoir from the larger-than-life, multifaceted lead vocalist of Iron Maiden, one of the most successful, influential and enduring rock bands ever.

Pioneers of Britain’s nascent Rock & Metal scene back in the late 1970s, Iron Maiden smashed its way to the top, thanks in no small part to the high-octane performances, operatic singing style, and stage presence of its second, but twice-longest-serving, lead singer, Bruce Dickinson. As Iron Maiden’s frontman—first from 1981 to 1993, and then from 1999 to the present—Dickinson has been, and remains, a man of legend.

But OTT frontman is just one of the many hats Bruce wears. In addition to being one of the world’s most storied and well-respected singers and songwriters, he is an airline captain, aviation entrepreneur, motivational speaker, beer brewer, novelist, radio presenter, and film scriptwriter. He has also competed as a world-class level fencer. Often credited as a genuine polymath Bruce, in his own words (and handwritten script in the first instance!), sets forth many personal observations guaranteed to inspire curious souls and hard-core fans alike.

Dickinson turns his unbridled creativity, passion, and anarchic humor to reveal some fascinating stories from his life, including his thirty years with Maiden, his solo career, his childhood within the eccentric British school system, his early bands, fatherhood and family, and his recent battle with cancer.

Bold, honest, intelligent and very funny, his memoir is an up-close look inside the life, heart, and mind of one of the most unique and interesting men in the world; a true icon of rock. 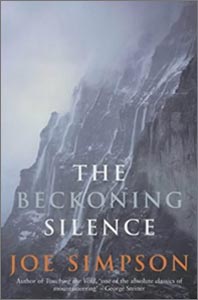 Joe Simpson has experienced a life filled with adventure but marred by death. He has endured the painful attrition of climbing friends in accidents, calling into question the perilously exhilarating activity to which he has devoted his life. Probability is inexorably closing in. The tragic loss of a close friend forces a momentous decision upon him. It is time to turn his back on the mountains that he has loved. Never more alive than when most at risk, he has come to see the last climb on the hooded, mile-high North Face of the Eiger as the cathartic finale.