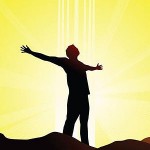 Tonight my wife bought a Samsung LCD for me to hang above the treadmill. She also bought a wall mount (they only had a fancy swiveling thing at the ready), an AppleTV and an HDMI cable. So when I came home, I gathered up all the tools I would need – I was calm and collected and ready to efficiently get this thing hung.

So I proceed to find a stud, do all the measuring, place the template, mark the holes for the mounting bracket, etc. I measured three times just to make sure. I’m drilling a 3-inch pilot hole with a 7/32nd bit, the first hole, and I’m level, not pushing. The bit snaps down near the chuck. It’s now embedded almost completely in the stud – gone forever. The bit is about 30 years old, a hand-me-down from a drill set given to me by my father. So I jump in the car and go down to Ace Hardware and get their last 7/32nd.

I drill the holes a little lower now. I then spend about 15 minutes with an adjustable wrench putting huge anchor bolts into the studs, getting that mounting plate tight as a fiddle. Perfect.

I go to mount the two arms on the back of the television… of all the mounting screws I was given, none fit the Samsung mounting bracket holes – they are either too thick or too long. I did have some that were too long but fit… so I measured and cut them down to the proper length. I get the first arm attached without a hitch. Looks good. The second arm? It hated me.

I’m slowly screwing in the first screw… suddenly I’m turning air. The head of the screw sheared right off – leaving the rest of the screw in the recessed hole in the television. What!? I try pliers to try to unscrew it. Nope – not budging.

Being the optimist, I decide that perhaps one of the possible two screws might hold the arm well enough to use it. I wasn’t getting that broken screw out. So I start putting that screw in – snap! I now have two broken screw shafts stuck in the back of the television without any hope of quickly freeing those holes up for ones I’d run out and buy. Essentially the thing couldn’t be mounted to the wall any longer. WTF.

Resigned to use it on a table, I am fuming about those cheap screws that farked up the ability to use any mounting hardware but also the TV itself. I run back to the store and return the mounting stuff and exchange the TV. After 20 minutes of manager talk and stuff, they agree. I’m at the register and they tell me I owe them $200.

I asked them what for? Well, they applied the cost of the mounting hardware against the price of the TV and that’s the difference. Instead of exchanging the TV, the guy rang up the new one and took off the price of the hardware. After a few go-rounds of me explaining what I was doing and what they agreed to do, he finally understood.