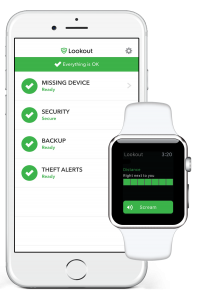 I don’t often mention applications here, hell… I don’t post very often here. But I just downloaded and tried a sweet, free iOS application that I’d like to tell you about.

I’m a proud Apple Watch owner. One of the things I nearly do all the time is to step away from my phone and quite nearly forget it. I have an iPhone 6+ and I don’t usually keep it in a pocket when indoors. Lookout has a companion watch application that will notify you (if enabled in the iOS app setting) if you’re about to lose your BLE connection. Very, very handy. The true reason I’m even using it. Normally all you’d get is a broken phone icon on the watch, but this is better. I’m think Apple will probably add this to the upcoming version of iOS. If that’s the case, I’ll ditch this app, but if they don’t I’ll be covered.

Also – if your phone is about to die, it will save the device’s last location right before dying so that it can be looked up later (if it hasn’t been moved). You need to keep the app running in the background, but it really doesn’t affect battery life. On my 6+ it’s even less of a concern.

It comes with some Find My Phone functionality (scream even when device is on silent, lost message to the lock screen). It has a theft alert (you pay a monthly fee for) that I haven’t tried. It will send you an email with the location if the service detects activity that can be construed as theft. I don’t know how that works, but it sounds interesting.

It will store your contacts in case you need to transfer to a new phone. iCloud takes care of that though. Same with photos storage (which is a pay to unlock) – I’ll use iCloud thanks.